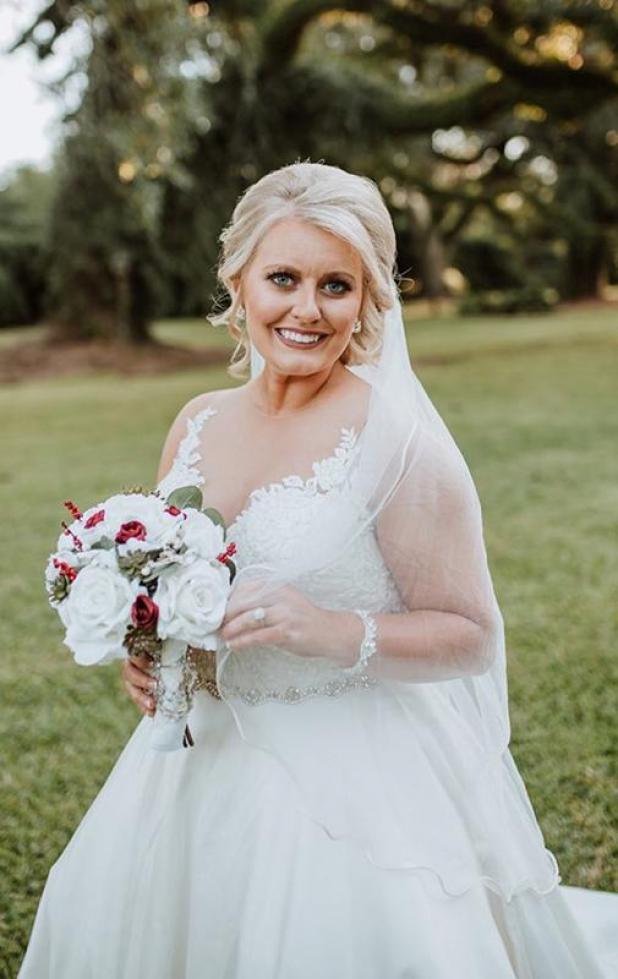 St. Michael the Archangel Catholic Church provided the romantic setting on Dec. 13, 2019, for nuptials uniting Miss Allison Elizabeth Hoffpauir and Mr. Austin Lee Guidry in marriage.
Deacon Byron Soley officiated for the 6:30 p.m. ceremony.
The bride is the daughter of Mr. and Mrs. Craig M. Hoffpauir of Crowley. She is the granddaughter of Mr. and Mrs. Louie P. Gary of Crowley and Mr. and Mrs. Cecil G. Hoffpauir of Iota.
The bride is a 2014 graduate of Iota High School and earned a Bachelor of Science degree in elementary education from McNeese State University in 2018. Ali is employed by the Vermilion Parish School Board as a middle school mathematics teacher at Rene Rost Middle School.
Parents of the groom are Mr. and Mrs. Jimmy Guidry of Abbeville. Austin is the grandson of the late Howard and Velta Guidry and the late George and Verna Baudoin, all of Abbeville.
The groom is a 2012 graduate of Abbeville High School and is presently employed by Wood Group.
Musical selections for the ceremony were provided by Laura Couvillon Humble, vocalist, and Marianne Bischoff Lombas, pianist.
Scripture readings were offered by Courtney Jones, godmother of the bride, and Beverly Soley, cousin of the groom.
Escorted to the altar by her father, the bride was radiant in an ivory Allure Romance wedding dress featuring a stunning illusion deep V-neckline graced with delicate lace appliques embellished with seed pearls and crystal beadwork. A belt richly encrusted with Swarovski crystal beading defined the dress at its natural waistline, and the dramatic illusion open back was accentuated by lace appliques and featured a classic, exposed satin-covered button closure that ran down the length of the dress. The beautiful and subtly pleated soft silk Mikado skirt elegantly brushed the floor and flowed into a cathedral length train.
The bride paired her dress with a two-tier fingertip length veil edged in ivory satin.
She carried a posy bouquet of white hydrangeas and white and burgundy roses hand-tied with a beautiful satin ivory ribbon.
In keeping with bridal tradition, the bride’s bouquet held the rosaries of two of her great-grandmothers, Rena LeJeune and Rose Leonards, as something old, while the bride’s dress and veil served as something new. The bouquet was wrapped in a lace handkerchief that belonged to the groom’s grandmother, Velta Guidry, to serve as something borrowed. And, finally, a blue gemstone from Germany, provided by the bride’s aunt and uncle, Raj and Paula Kumar, was tucked into the bride’s bouquet as something old.
Attending the bride as matron of honor was Mallory H. Morgan, sister of the bride. Bridesmaids were Abigail Leonards Duthu, cousin of the bride, and Caitlin Guidry, friend of the bride. Serving as junior bridesmaid was Annalyce Jones, cousin of the bride.
The bridal attendants were attired in one-shoulder Vera Wang dresses with satin sashes complemented by pearl accessories by Sanctify.
They carried posy bouquets with white hydrangeas, white roses and burgundy roses tied with burgundy satin ribbon.
Attending the groom as best man was Tyler Guidry, brother of the groom. Groomsmen were Jacob Guidry and Seth Hebert, friends of the groom. Serving as junior groomsman was Luke Hebert, cousin of the groom.
Ushers for the ceremony were Jeff Hoffpauir, godfather of the bride, and Tyler Hoffpauir, Brian Hoffpauir and Ethan Hoffpauir, cousins of the bride.
The groomsmen and ushers were attired in traditional black tuxedos paired with burgundy ties. They wore boutonnieres of white and burgundy sweetheart roses.
Flower girls for the ceremony were Audrey Jones, goddaughter of the bride, and Hilaree Guidry, goddaughter of the groom. They were attired in ivory tulle gowns by Joyfolie and carried bouquets of burgundy sweetheart roses.
Serving as ring bearer was Luke Jones, cousin of the bride. He was attired in a traditional black tuxedo paired with a burgundy tie and wore a boutonniere of white and burgundy sweetheart roses.
For her daughter’s special day, the mother of the bride, the former Andre’ Gary, chose a navy Pronovias gown in sleek cuts of glossy Mikado silk with a high sleeveless bodice and an A-line skirt with gently puckered seams that created a linear, stylized accent. A belt embellished with Swarovski crystal beading defined the dress at the natural waistline
The mother of the groom, the former Phyllis Baudoin, was attired in a navy Jessica Howard floor length gown featuring three-quarter length sleeves, a floral lace bodice and a taffeta skirt. A waistline bow and pockets completed the dress.
Both mothers wore corsages of white and burgundy sweetheart roses.
Following the recitation of vows, the newlyweds were honored with a reception held at the International Rice Festival Building in Crowley. Lighted Christmas trees adorned the entryway, along with fresh greenery and assorted flower arrangements. Fresh wreaths and lighted lanterns were placed on the guest tables.
The bride’s table held a four-tiered confection. The almond and white cakes were filled with a variety of flavors including pineapple, cookies and cream and Bavarian cream. The cake was topped with a golden script “G” to represent the last initial of the newlywed couple.
The groom’s table held a two-tiered red velvet cake with chocolate frosting. The cake was decorated with fresh-dipped chocolate-covered strawberries, and the table was decorated to showcase one of the groom’s favorite pastimes, hunting.
On the evening prior to the wedding, the groom’s parents hosted a rehearsal dinner at the Rice Palace, where guests selected from a menu of steak and seafood dishes.
Following a Western Caribbean cruise that included Mexican, Grand Cayman and Jamaican ports of call, the newlyweds are making their home in Abbeville.