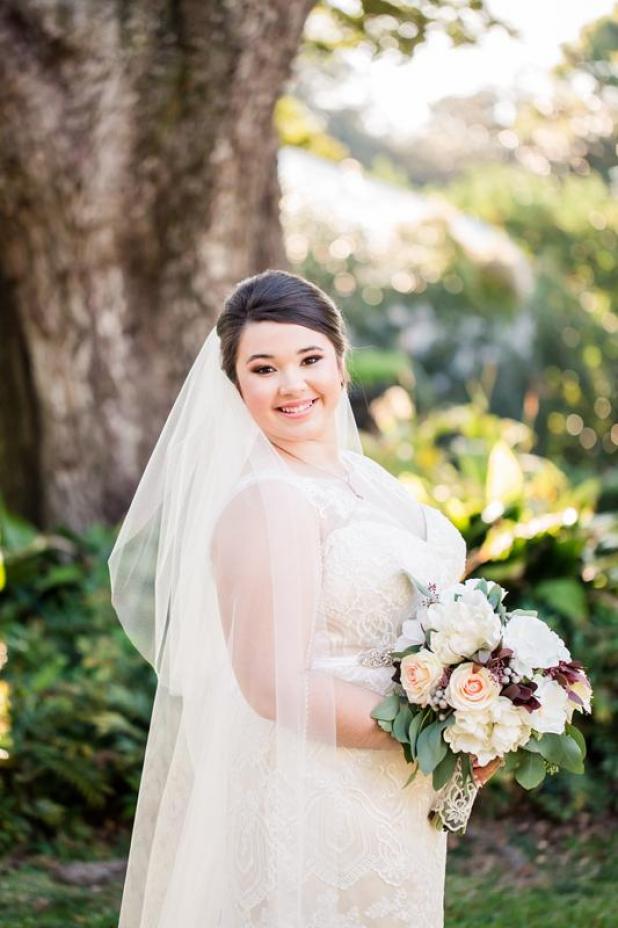 Morgan Kristine LeBeouf and Ty Christian Henderson, both of Iota, were joined in Holy Matrimony at St. Joseph Catholic Church in Iota on the evening of Saturday, Jan. 20.
Fr. Mikel Polson officiated the 6 p.m. nuptials.
The bride is the daughter of Kelli and Jeffery LeBeouf of Crowley. She is the granddaugher of Ethel and Austin “Tony” Brown of Iota and the late Mildred and Wilson Cormier of Crowley.
She graduated from Notre Dame High School of Acadia Parish in 2012 before attending Louisiana State University Eunice, where she earned a degree in business. She is presently employed at Edwards, Stefanski & Zaunbrecher, L.L.P.
The groom is the son of Carol and Darrin Henderson of Iota. His maternal grandparents are Dorlis Pippin and Russell LeBlanc and the late Harvey Douglas Pippin, all of Crowley, and his paternal grandparents are Audrey and Joseph Ronald Henderson Sr. of Iota.
He is a 2012 graduate of Iota High School and is currently employed at Jeff Davis Electric Co-op, Inc.
Escorted by her father to the strains of “Trumpet Voluntary” by Jeremiah Clarke, the bride was exquisitely dressed in a Maggie Sottero creation adorned with ivory lace over a light gold satin underlay. The elegant A-line dress featured a sweetheart neckine that was embellished with a custom-designed sleeveless illusion top. A rhinestone and pearl encrusted belt along the front of the waistline was closed in the back with an ivory satin bow. The back of the dress was highlighted with buttons and the entire dress was finished with a stunning scalloped lace hem that flowed into a chapel train.
The bride paired her gown with an ivory cathedral length veil adorned with a beaded floral design and trimmed with scalloped edging.
She carried a hand-tied bouquet of white peonies, antique roses, ivory anemones, sunburst protea and brunei berries accented with silver dollar eucalyptus and seeded eucalyptus. The bouquet was adorned with the bride’s mother’s rosary and her grandmother’s handkerchief, and the stems were wrapped in lace from her wedding dress.
In keeping with tradition, the bride wore an antique necklace worn by her maternal great grandmother on her wedding day as “something old” and her wedding dress as “something new.” A blue floral handkerchief of her grandmother’s served as “something blue,” while her mother’s rosary, along with a handmade garter from her mother-in-law’s wedding dress, served as “something borrowed.”
The wedding party entered the church to “Canon in D” by Johann Pachelbel.
Meagan LeBeouf, sister of the bride, served as maid of honor. Amaya Trahan and Elizabeth Dartez, friends of the bride; Lara Leonards, sister of the groom; and Caroline Wood, cousin of the bride, served as bridesmaids.
The bridal attendants were clad in romantic floor length bordeaux chiffon gowns with beaded lace and deep V-backs. They carried hand-tied bouquets of white peonies and porcelana roses accented with silver dollar eucalyptus.
Shane Caswell, friend of the groom, served as best man. Standing as groomsmen were Josh Delome and Bryce Esthay, friends of the groom, and Casey Pousson and David Pousson, cousins of the bride. John Leonards, brother-in-law of the groom, and Jonathan Conrad, cousin of the groom, served as ushers.
The groom, groomsmen and ushers wore gray suits with bordeaux-colored paisley ties. They wore boutonnieres of porcelana roses and greenery.
For her daughter’s wedding day, the mother of the bride, the former Kelli Brown, chose a full length ball gown by Eliza J featuring a matte jersey bodice with a bateau neckline, three-quarter sleeves with ornate beaded cuffs and a black and gold metallic brocade floral skirt.
The mother of the groom, the former Carol Pippin, selected an Alex Evenings floor length A-line gown with a crew neck, V-back and all-over embellished lace floral rosettes in navy blue. She completed her ensemble with a fur stole draped over her shoulders.
Following the ceremony, the bride and groom, followed by their attendants, recessed to “Rondeau” by Jean-Joseph Mouret.
Music for the ceremony was provided by vocalist Tina Reaux, organist Angela Sneed, trumpeter Mike Mcgee and violinist Tommy Benoit.
Selected scriptures were read by Cathy Guidry, godmother of the bride, who read Genesis 2:18-24, and Leah Conrad, cousin of the groom, who read 1 Corinthians 12:31 - 13:8. The Responsorial Psalm was sung by Reaux.
Afterwards, family and friends joined the newlywed couple for a reception held at the Grand Opera House in Crowley.
The guest tables were decorated with simple centerpieces including jars and lanterns adorned with flowers and candles atop wood slices.
The bride’s three-tiered round cake was topped with a bouquet of peonies, porcelana roses, baby’s breath and seeded eucalyptus and adorned with clusters of the same flowers. The cake’s flavors included strawberry cream cheese, Chantilly and chocolate chip fudge, and it was wrapped in butter cream frosting. The cake was cut with a beautiful serving set used by the bride’s parents at their wedding and served by the bride’s godmother, Cathy Guidry.
For their wedding toast, the bride and groom used silver goblets used at the wedding of the bride’s parents.
The groom’s cake was made in the shape of a Yeti-inspired ice chest with a cookies and cream filling. It was served by Jody Henderson, aunt of the groom.
On the evening prior to the wedding, the groom’s parents hosted a 6:30 p.m. rehearsal dinner at their residence.
Following a wedding trip to Washington, D.C., the couple is residing in Iota.