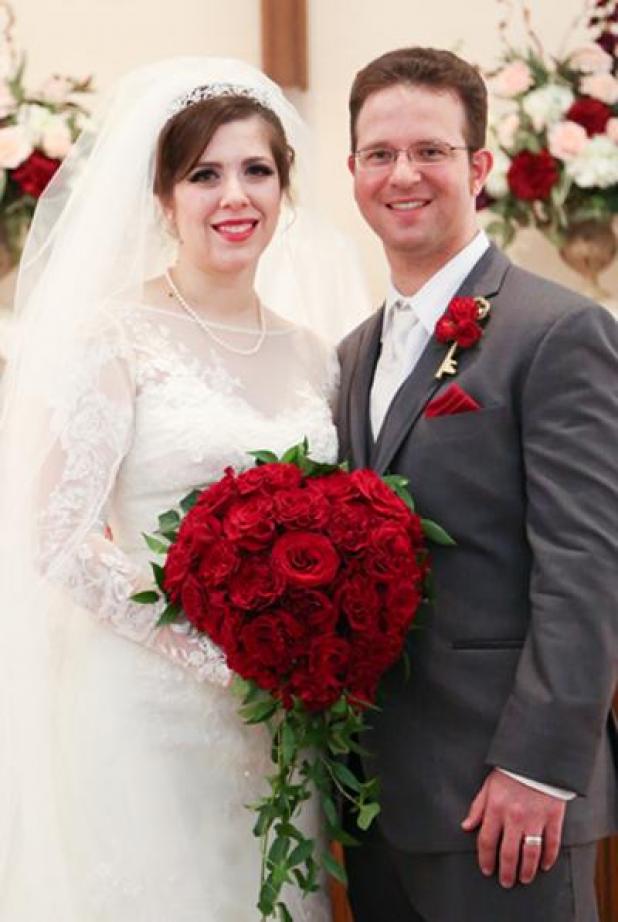 Sacred Heart Catholic Church in Abilene, Texas was the setting on Saturday, July 8, 2017, for an one o’clock afternoon wedding ceremony uniting in marriage Ivette “Evie” Magalie Bruno of Abilene, Texas and Brandon Keith Cahanin of Eldorado, Texas. The lasso wedding was celebrated by Fr. Robert Bush.
The bride is the daughter of Edwin and Ivette Bruno of Abilene, Texas. Her grandparents are Esperanza Vega of Abilene, Texas and Manuel and Carmen Bruno of Vega Baja, Puerto Rico.
Evie is a 2010 graduate of Stevens High School and attended Texas Veterinary Medical Association where she majored in veterinary studies. She is currently employed as a veterinary tech.
The groom is the son of Keith and Eurella Cahanin of Mire. His grandparents are Howard DeRouen Jr. of Rayne, the late Alma G. DeRouen, and the late Walter and Vivian Cahanin of Mire.
Brandon is a 2003 graduate of Rayne High School, a 2007 graduate of UL-Lafayette with a bachelor of science in accounting, later attaining a MBA in 2009. He acquired his CPA in 2011 and is employed as the finance director for the City of Eldorado, Texas.
Providing musical selections for the afternoon nuptials were Kim Nyugen and Sylvia Herrera.
Scriptures were recited by Catherin Morrow, while Gifts were presented by Paul and Idelia Easley, Esperanza Vega, Ivette Bruno and Eurella Cahanin.
Escorted by her father, the bride was radiant in a long-sleeve, lace-appliqued wedding gown of white illusion tulle over a strapless dress of white silk designed with a sweetheart neckline. A tiara-style headpiece held blusher and cathedral-length veils and she carried a bridal bouquet of full red roses with ivy accents.
Traditional items selected by the bride for her wedding day were pearl earrings and neckline serving as something old and borrowed. A pearl bracelet was something new, while a special rosary was something blue.
Attending the bride as maid of honor was her grandmother, Esperanza Vega.
Bridesmaids were Rachel Doise and Crystal Frederick, sisters of the groom, and Mary Lou Maldorado, cousin of the bride.
Bridal attendants each wore a knee-length dress with a lace shoulder accent. The maid of honor wore a red dress with silver heels, while the bridesmaids wore silver dresses with red heels while carrying a small bouquet of red roses with baby’s breath accents.
Serving as flower girls were Makayla Maldonado, cousin of the bride, and Alaina Frederick, niece of the groom. Each wore a knee-length ivory dress immitating the bride’s wedding gown with capped sleeves and lace accents.
Attending the groom as best man was a friend, Theo Melancon.
Groomsmen were Edwin J. Bruno, brother of the bride, and Tommy Hebert and Paul Burke, friends of the groom.
Male attendants each wore formal tuxedoes in a charcoal hue. Attire for the groom was an ivory shirt and tie, best man wore an ivory shirt and red tie, while the groomsmen selected an ivory shirt and silver tie. Each wore a red pocket square and red rose boutonniere.
Serving as ring bearer was Garret Frederick, nephew/godson of the groom. He wore a gray suit with ivory shirt and bowtie, along with a red rose boutonniere.
Ushering guests were Ryan Lemoine and Nick Vidrine, friends of the groom, and Jared Dise and Brandon Frederick, brothers-in-law of the groom.
For her daughter’s wedding, Ivette Magalie Cacho Bruno wore a stone-color, knee-length dress with matching dress jacket. The groom’s mother, Eurella DeRouen Cahanin selected a light blue dress with silver details topped with an ankle-length, sheer, long-sleeve jacket. Each was presented red roses for the special occasion.
Immediately following the wedding ceremony, the newlyweds were honored during a reception held at The Winsor Hotel in Abilene, Texas. The reception area carried a vintage French-country decor.
Among the refreshments provided for the guests were the two wedding cakes. The bride’s cake, a three-tier white confection with almond and raspberry filling. The grooms’ cake was a cookie and white chocolate theme cake.
Guests attending the wedding traveled from points of Texas, Louisiana, Ohio, Pennsylvania, California, Canada, Brazil and Venezula.
Following their wedding trip to Orlando, Florida, the couple will reside in Eldorado, Texas.
Prior to the wedding, a rehearsal dinner was held Friday, July 7, at the Cotton Patch Café by the groom’s parents. Guests enjoyed a full menu of entree including steak and seafood selections.