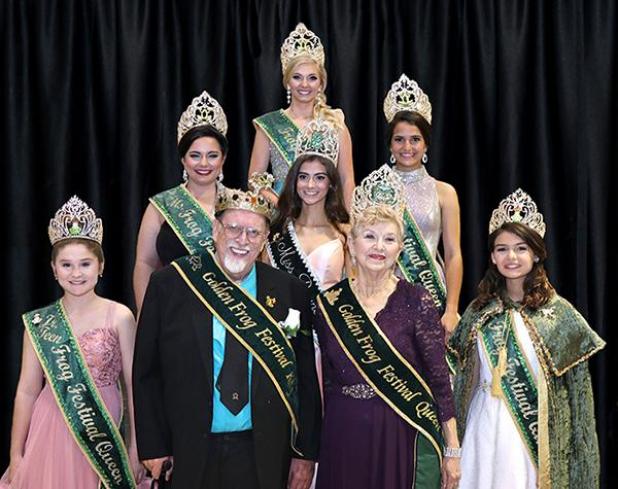 RAYNE - A full slate of new Frog Festival royalty was named over the weekend, each receiving their crowns and banners as they will represent Rayne and the Frog Festival during the upcoming 2019-2020 year.
Saturday’s pageantry began at 9 a.m. at the Civic Center with the crowning of the new Frog Festival Junior Queen and Jr. Teen Queen, followed by the evening contests when the Teen, Miss and Ms. Queens were selected.
Selected to reign over the 47th Annual Rayne Frog Festival on May 8-11 were:
Miss Queen Kennidy Peavy;
Teen Queen Janci Aubé;
Ms. Queen Lauren Smith;
Jr. Teen Queen Klarisse Thibodeaux; and
Junior Queen Allyson Pinson.
Also introduced during the evening program were the 2019-2020 Golden Frog Festival King and Queen, Paul Kedinger and Fran Bihm.
Emcee for the evening program was Cheryl Boudreaux, with judges including Angelique Bernard of Breaux Bridge,K’Rees Woods Broussard of Gueydan and Ty Babin of Delcambre.
Past Frog Festival royalty of all age groups were in attendance and aknowledged during introductions, including Victoria Richard, Kelsey Primeaux Lormand, Ashlee Guilbeau, Joyce Trahan, Rose Marie Stelly, Gabby Guilbeau, Ralph Stutes, Henrietta Didier, Phyllis and Ken Arceneaux and Loretta Bordes.

Frog Festival Queen
Kennidy Elizabeth-Ann Peavy, 19-year-old daughter of Erin Ann and Scott Peavy of Lake Charles, will reign as queen of the 47th Annual Rayne Frog Festival.
Crowning her successor was Fallyn Gonsoulin, last year’s honoree, and was sponsored for the event by her parents.
Kennidy is a graduate of Rosepine High School and is employed as a dance instructor at Premier Dance Center. She plans to attend McNeese State University to obtain a degree in animal science with hopes to one day own her own zoo.
Named First Maid was Haleigh Johnna Danae Newnham, 20-year-old daughter of Letitia and David Dees of Scott. She is a student at McNeese State University.
Virginia Coberly was named Second Maid. She is the 19-year-old daughter of Scott and Bridget Boudreaux of Westlake. She is a applied behavior analyst at Milestones Behavioral Services while a freshman at Sowela Community College majoring in early childhood education.
Miss Coberly was also awarded the gold tray as Miss Congeniality, an honor chosen by her fellow contestants. She was sponsored for the pageant by PSA Training & Consulting & Family.

Frog Festival Teen Queen
Janci Michelle Aubé was crowned the 2019 Frog Festival Teen Queen by last year’s honoree, Kailey Hollier.
The 14-year-old daughter of Ricky and Bunne Aubé of Rayne is a freshman at Lafayette Christian Academy where she is very involved with school and extracurricular activities.
Miss Aubé was also awarded the gold tray as Miss Congeniality, an honor chosen by her fellow contestants.
Named First Maid was Kerrigan Renee Vincent, 16-year-old daughter of Kelly and Melissa Vincent of DeRidder. She is a sophomore at DeRidder High School.
Emma Mistric was named 2nd Maid. She is the 16-year-old daughter of Dawn and Daryl Mistric of Duson and a junior at Acadiana High School.

Frog Festival Ms. Queen
Lauren Cheatwood Smith of Anacoco was named the 2019 Frog Festival Ms. Queen. She was sponsored for the event by the Iowa Rabbit Festival and was crowned by last year’s honoree, Brittney Reed.
Lauren is the 27-year-old daughter of Louis Cheatwood and Robin and Keith Kay. She represented the Iowa Rabbit Festival during the pageant. She is employed by the Sabine Parish Sheriff’s Office as a civil deputy and dispatcher.
Leslie Nicole Meyer of Rayne was named First Maid to the Frog Festival Ms Queen. The 41-year-old is the owner/operator of Barks and Bubbles by Leslie and dog groomer. She was sponsored for the event by Kangaroo’s Pouch of Rayne.
Named Second Maid was Jackie Bergeron Martz of Lake Charles, the 41-year-old owner-operator of A-Plus Monogramming in Lake Charles. She is the daughter of Lowell and the late Fae Bergeron and is married to Joel Martz. She was sponsored for the pageant by Lake Charles Mayor’s Armed Forces Commission.
Jackie was also selected Miss Congeniality by the contestants, a prestigious honor.
Third Maid was Stephanie Elaine Garner of Scott, the 42-year-old daughter of the late Herman and Judith Garner. She is employed as a medical and insurance billing recorder. She was sponsored for the event by James Romaro.

Frog Festival Junior Queen
Allyson Elizabeth Pinson, 11-year-old daughter of Ashley Manley and Jarred Manley of Rayne, will serve as the 2019-2020 Frog Festival Junior Queen and will reign over the 47th annual Frog Festival. She was also crowned by Alyssa Theriot during ceremonies held Saturday morning at the Rayne Civic Center. Allyson is a sixth grade student at Northside Christian School in Crowley.
First Maid was MaKenzie Claire Spallino, 11-year-old daughter of Chasity Broussard and Dustin Spallino of Rayne. She is a fifth grade student at Mire Elementary.
Mia Angelle Comeaux was named Second Maid. She is the 11-year-old daughter of Heath and Taryn Comeaux of Kaplan and is a sixth grade student at North Vermilion Middle School.
The Frog Festival Junior Queen’s Pageant is sponsored by the ladies of Preceptor Alpha Chi Chapter of Beta Sigma Phi Sorority.

Frog Festival Poster Contest
The unveiling of the 2019 Frog Festival poster was also held during the evening. Festival Chairman Jeremy Lavergne and Poster Chairman Cordelia Pizzalotto announced that 26 entries were submitted for this year’s contest.
Introduced as the 2019 poster winner was Ethan Alleman as his winning poster was unveiled. Ethan is the son of Jason and Leslie Alleman of Rayne and is a junior at Rayne High School.
Additional highlights of the Frog Festival Queen’s Pageants will be continued in next week’s edition of The Rayne Acadian-Tribune.