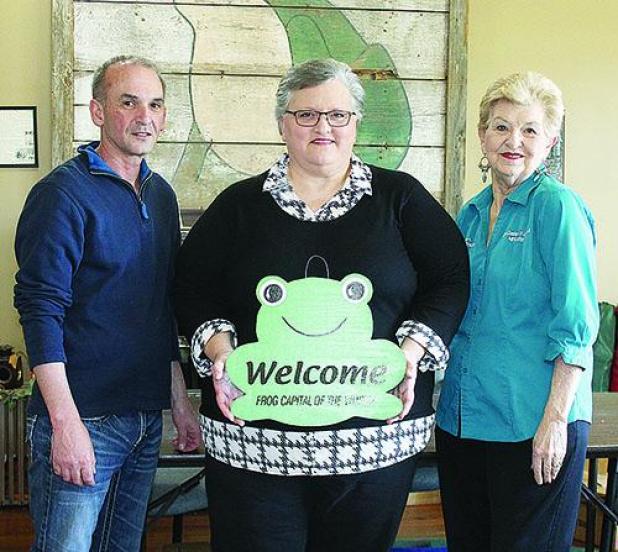 RAYNE - The 47th annual Frog Festival will honor a Rayne native and long-time promoter of the annual festival and city.
Lisa Smith Soileaux, managing editor of The Rayne Acadian-Tribune, has been named Grand Marshal of the 2019 Frog Festival and will lead the festival’s Grand Parade on Thursday, May 9, according to an announcement by Jeremy Lavergne, president of the Rayne Chamber of Commerce and chairman of this year’s festival.
“I am surprised and very humbled by this honor,” said Soileaux. “Being named Grand Marshal of the Rayne Frog Festival – just to be considered among the impressive list of former Grand Marshals – is an honor and comes as a complete surprise.”
Soileaux continued, “I love our city and try to do whatever I can for the many programs and activities to promote and improve the Frog Capital. Whether presenting it’s rich history or making plans for the future, whatever is needed from me is what I do. That’s why this is such a surprise.”
Soileaux was nominated for this honor by Fran Bihm, executive director of the Chamber of Commerce and a former co-worker at The Rayne Acadian-Tribune.
“Lisa was born and raised in Rayne and loves her community,” Bihm wrote in her nomination letter. “She helps with many activities, assists any and all organizations with programs – local and parish – and does all she can to advance our city.”
Soileaux has assisted the OST City program, the Rayne Beautification Board and numerous other historical organizations that share Rayne’s history so that local residents can appreciate where they come from and where they’re going, according to Bihm.
“She has published numerous historical articles, sections and special editions during her quarter century at The Acadian-Tribune,” Bihm wrote. “She’s ensured that Rayne’s history, as well as the history of the frog industry that put Rayne on the international map, is remembered.”
Named managing editor of Acadian-Tribune just over a year ago, Soileaux has a combined 25 years of journalistic experience at the local newspaper. She has previously held the position of school reporter and photographer, Lifestyle editor, Sports editor (probably among the first females in the area with that title) and assistant news editor. Now she does it all.
In addition to a number of years on the coaching staff, Soileaux was a staff member for six years as Development Director and PE teacher at Rayne Catholic Elementary School. There, she also served as athletic director for 10 years, the first female AD at the school. While there, she shared her love of sports, especially volleyball and softball, as the first-ever coach of those sports at RCE.
“She was also very involved with the Rayne Recreation Department by coaching for many years and covering Rayne youth, highlighting that positive aspect of our community,” Bihm noted in her nomination letter.
A 1980 Honor Graduate of Rayne High School, Soileaux was an all-round athlete who excelled in both volleyball and softball. To date, she is the only Lady Wolf named to the Louisiana All-State Volleyball Team (setter) in recognition of her play during her junior year when RHS took home the 3A State Runner-Up trophy.
She went on to continue her education at the University of Southwestern Louisiana – now the University of Louisiana at Lafayette – on a volleyball scholarship.
Also known for her artistic talents, Soileaux has provided local businesses with art work and yard signs that display “Rayne Pride.”
Soileaux also has held an office or is still a member of numerous local civic and service organizations.
She is a past board member and officer of the Rayne Chamber of Commerce and is a long-time and very active member of the Rayne Garden Club, where she has served as an officer and has chaired most local club projects.
She’s chaired the Louisiana Garden Club Federation Cleanest City Contest and Rayne has been honored on both the district and state level under her leadership.
She also is currently chairing the re-establishment of the Magnolia Gardens along the railroad tracks.
As a lifelong parishioner of St. Joseph Roman Catholic Church, Soileaux has served as member of the parish council.
She also was a member and former officer of the American Business Women’s Association for a numebr of years.
The former Lisa Smith, she is the daughter of Jimmy Smith and Lorraine LeBlanc Myers of Rayne. She has been married to her husband, Darrell Soileaux, for 35 years and they are the parents of a daughter, Leslee Ann Soileaux Gagliano of the Dallas area.
Leslee and husband Sam have blessed her and Darrell with four grandchildren.
The 2019 Rayne Frog Festival will be celebrated May 9 through 11.
In a first for the festival, the Grand Parade will kick off this year’s festivities at 6:30 p.m. Thursday, May 9, concluding at the Frog Festival Pavilion, where the official opening ceremonies will be staged.