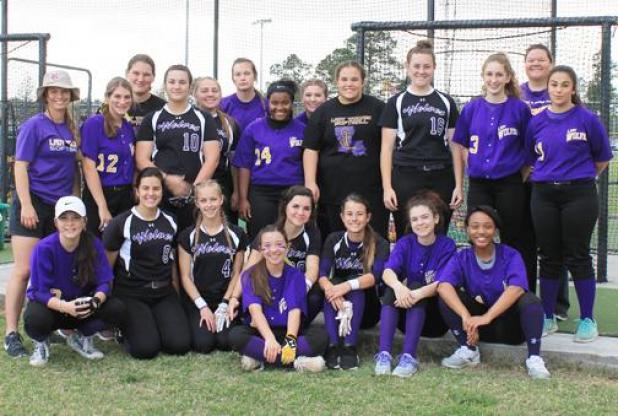 LAKE CHARLES - The Rayne High Lady Wolves hit the road Thursday for a district double-header against Washington-Marion.
In their first win on the day, the Lady Wolves recorded a 20-0 shurout of the Indians.
Leading the Rayne offense during the win was Kennedie Bouegrois with three hits on the day, 2 singles, double, 6 RBIs and three runs.
Savanna LaCombe was 2-2 with a single, double, 5 RBIs and 3 runs, while Jade Louviere was 2--2 with single, double, 3 RBIs and 2 runs. Jessie Cary, Trinity Axtell and Peyton Richard finished the offense each a hit.
Throwing on the mound for Rayne was K Weber who threw three strikeouts while giving up two hits nd four walks for the shutout.
In Rayn’e second win of the day, the Lady Wolves claimed a 15-0 shutout over Washington-Marion.
Leading the Rayne offense were Tori Arceneaux, Savanna LaCombe and Trinity Axtell.
Arceneaux recorded three hits and two RBIs, while LaCombe and Axtell each with two hits. LaCombe tallied a single, double and two runs, while Axtell had two singles, 2 RBIs and a run.
Rounding out the Rayne offense were Brittany Broussard (2-2, single, double, 3 RBIs, 3 runs), Kennedie Bourgeois (1-2, double, 2 runs), Jessie Cary (1-3, single, run), Peyton Richard(1-2, single, 2 runs), Elizabeth Daigle (1-2, triple, 2 RBIs, 2 runs) and Jade Louviere (RBI).
Collecting the win on the mound for Rayne was Elizabeth Daigle who three six strikeouts while giving up only one walk and no hits during the shutout.
The Lady Wolves were slated to meet DeRidder during a district contest today (Thursday), followed by a non-district game at home Saturday against Cecilia High.
Wolves
The Rayne High Wolves baseball team split games in two days for a 1-1 tally in district baseball action thus far.
In their first district outting at LaGrange, the Gators took an early 1-0 lead in the first inning, but the Wolves tied things up in the third inning with a run scored by Tucker Babineaux off a Zack Fontenot triple.
LaGrange answered with another run in the sixth inning to hold a slim 2-1 lead.
Rayne answered in the bottom of the inning with two runs for the win seeing Julian Harvey and Eric Alleman score on a Babineaux double.
Collecting the win on the mound for the Wolves was Hunter Meche who threw a one-hitter with nine strikeouts.
In Rayne’s second district contest the very next day against LaGrange, the Gators gained a quick lead with a score in each of the first two innings for a 2-0 lead heading into the final frames.
LaGrange collected two additional runs in the sixth inning for the 4-0 Gator win.
Despite hits by Alex Savoy, Lee James (2) and Darian Richard, the Wolves couldn’t keep men on base for a score.
On the mound for the Wolves during the loss were Tucker Babineaux (five innings with two strikeouts, three hits, two runs) and Chandler Broussard (one inning with one strikeout, two runs and five hits).
The Wolves were schedule to meet Leesville and Notre Dame this week.