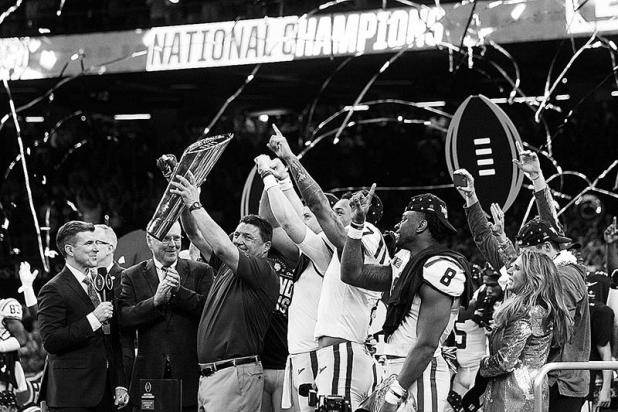 LSU celebrates after the Tigers’ 42-25 victory over Clemson Monday in the National Championship game.

Led by Heisman Trophy-winning quarterback Joe Burrow’s six-touchdown performance, Ed Orgeron’s top-ranked Fighting Tigers of LSU earned the title 2019 National Champions and arguably The Best Team Ever.
LSU (15-0) proved its dominant season by ending Clemson’s 29-game winning streak in a 42-25 victory over the defending champs.
“Well, I want to thank our great fans for being here,” said  Orgeron. “We left the hotel today, what a phenomenal group we had. They gave us energy all night, and they’ve been with us all year.
“Give the credit to our players. Those guys fought. We started working last year on January 17. They’ve worked their tails off with Tommy Moffitt. They did the right things, character, grit, determination.”
He continued, “We’ve got to give the credit to our coaching staff, Jack Marucci, Tommy Moffitt, all the trainers, and just a tremendous night for the LSU Tigers, tremendous night for the purple and gold, tremendous night for the state of Louisiana. We are so proud to represent them.”
The Tigers - playing 60 minutes southeast of the Baton Rouge campus - won the fourth national championship in program history: 1958, 2003, 2007 and 2019. Orgeron became the third-straight LSU head coach to win a title.
Burrow, Offensive Player of the Game, was 31-of-49 passing for 463 yards with five touchdown passes, while adding another 58 rushing yards and including a TD run. He accounted for all but 107 of LSU’s 628 yards of total offense, as the Tigers broke NCAA records for points and yards in a season. Burrow set NCAA single-season marks for passing touchdowns (60) and total touchdowns (65).
“I think what we did tonight can’t be taken away from us,” Burrow said. “I know this National Championship will be remembered for a long time in Louisiana. To do it in New Orleans is even more special. This is going to be remembered for a long time.”
After facing its biggest deficit of the season - 17-7 early in the second quarter - LSU scored 21 unanswered points to lead 28-17 at halftime. Though Clemson narrowed the margin to three, LSU scored the final 14 points of the contest including a 24-yard dagger from Burrow to Terrace Marshall Jr. with 12:08 to play that gave the Tigers the final margin.
LSU linebacker Patrick Queen was named Defensive Player of the Game after leading the Tigers with eight tackles including 2.5 behind the line of scrimmage.
“At the end of the first half, Coach O sat us down, calmed us down. We were really anxious being out there, so we just all gathered together and played team defense,” said Queen.
Wide receiver Ja’Marr Chase broke Josh Reed’s single-season receiving yards record in the second half. He caught nine passes for 221 yards and two touchdowns, while Justin Jefferson added 106 yards on nine catches. Tight end Thaddeus Moss also scored twice and caught five passes for 36 yards. Marshall finished with three catches for 46 yards.
Running back Clyde Edwards-Helaire ran 16 times for 110 yards.
The Best Team Ever.
It’s a striking and bold statement that’s rarely accurate and often hyperbole based solely on recency.
Arguments will begin now over this claim. History will show the 2019 LSU Football team finishing 15-0 - the second team in modern football to do so - with an NCAA record seven victories over Top-10 opponents, while leading the nation in scoring and total offense. LSU capped its perfect season by ending defending national champion Clemson’s 29-game winning streak.
Inside the lines, the Tigers were led throughout the season by record-setting, Heisman Trophy-winning quarterback Joe Burrow; Biletnikoff Award-winning wide receiver Ja’Marr Chase; and Thrope Award-winning safety Grant Delpit. They were supported by fellow All-Americans cornerback Derek Stingley Jr., guard Damien Lewis, center Lloyd Cushenberry III and running back Clyde-Edwards Helaire.
Outside the lines, national coach of the year Ed Orgeron followed a blueprint he presented in November of 2016 to bring LSU back to the pinnacle of collegiate athletics in his third full season as head coach.
He vowed to recruit the best offensive coordinator in football - then paired “slinger” Steve Ensminger with rising star and 2019 Broyles Award winner Joe Brady. He wanted to run a spread offense with a dual-threat quarterback - “somebody who knows how to run it” - and he convinced Burrow to transfer to LSU for his final two seasons and bring the Tigers the championships he envisioned.
He did it for Louisiana, his home and his people.