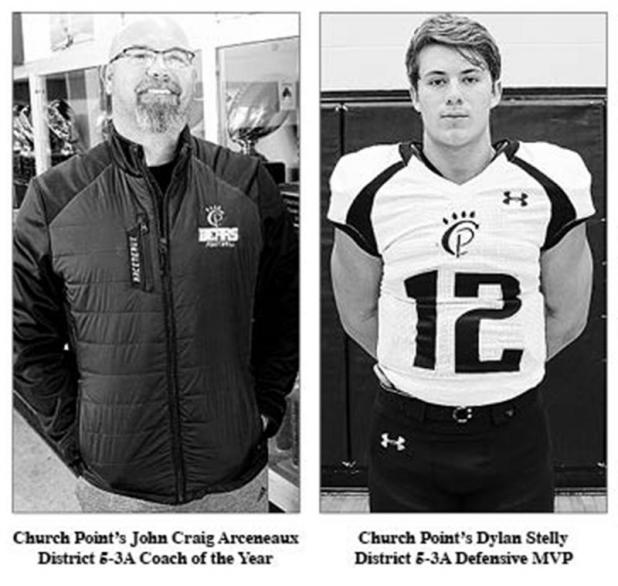 After an 0-2 start to the regular season, expectations weren’t especially high for the Church Point Bears at the beginning of the 2019 prep football campaign.
But things quickly changed after that.
After setbacks to perennial power Notre Dame and Class 5A newcomer Southside, the Bears reeled off seven straight wins and claimed the 5-3A district title with a 5-0 record that included victories over Iota and Northwest.
For their efforts, the Bears were rewarded heavily when the league recently released its 2019 All-District team.
The Bears were awarded 10 spots on the first team and also claimed two of the top three honors: Coach of the Year John Craig Arceneaux and Defensive MVP Dylan Stelly.
The Offensive MVP honor went to Northwest quarterback Montaze Sam.
Arceneaux guided the Bears to the No. 7 seed in the Class 3A playoffs where his team was eliminated in the second round by eventual state runnerup and No. 23 seed Jennings.
Stelly, a 6-foot, 205-pound junior linebacker, was the leader of the Bears’ defense with 96 total tackles. He had five tackles for a loss, two sacks, one caused fumble and one interception.
Stelly was one of four Bears listed to the first team defensive unit.
Junior Tony Gibson and sophomore Javen Gibson made the unit on the line and senior Cavon Chavis was one of four defensive backs selected.
Tony Gibson logged 51 tackles, six for a loss, and had five quarterback hurries and Kavem Gibson had 58 tackles, six for a loss, and two caused fumbles.
Chavis recorded 54 tackles and 10 pass breakups. He also recovered a fumble and had one interception.
The Bears landed six players on the offensive first team, including two at running back: senior Rodney Dupuis and junior Gavin Richard.
Dupuis, who became the school’s all-time leading rusher late in the season, picked up 1,139 yards and 10 touchdowns on 135 carries during his senior campaign.
Richard tallied 640 yards and 10 touchdowns on 96 carries. He also hauled in eight passes for 121 yards.
Senior Dax Moore was named the team’s tight end after hauling in four passes for 62 yards and four touchdowns while Jace Benoit and Cayne Romero, both seniors, were named to the team on the offensive line.
Christopher Dailey also made the team at the athlete position.
The Bears also landed six players on the second team: quarterback Brandt Boone, running back Kollin Guillory, wide receiver Macyn Bertrand, offensive linemen Lane Richard and Spencer Gotreaux and defensive back Ethan Castille.
Iota was also well represented on the team with seven first team selections.
The Bulldogs went 8-2 during the regular season and finished third in the league standings with a 3-2 mark behind champion Church Point and runnerup Northwest.
Senior Luke Doucet, the league’s leading rusher, was the third and final running back selected after racking up 1,483 yards and 15 touchdowns on 155 carries despite missing a few games due to injury.
Tyrone Charlot made the team at receiver after catching 33 passes for 542 yards and five touchdowns. The senior also had 28 rushes for 277 yard and four touchdowns.
Senior Connor Braquet, a four-year starter, made the unit on the offensive line and Luis Doreteo, a junior, was named the team’s kicker.
Three senior Bulldogs were named to the defensive first team: lineman Dylan Montgomery, linebacker Landon Doucet and defensive back Andrew Ashby.
Montgomery had 58 tackles, 24 for a loss, and two sacks. He added six quarterback hurries, caused four fumbles and recovered one.
Landon Doucet led the team in tackles with 85, including five for a loss. He caused two fumbles and had one interception.
Ashby was the leader of the Bulldogs’ secondary and recorded 72 tackles, five for a loss, and had one sack. He had seven pass breakups, one caused fumble and one fumble recovery.
Iota’s second-team members included running back Landen Doucet, offensive lineman Wyatt Schuff, defensive lineman Chris Newman, linebacker Trevor Lopez and defensive back Owen Daigle.